People Like Us 00: Warm Welcome from Catalyst on Vimeo.

The hall filled up more after my welcome and introduction. The video clip above gives you a glimpse of the atmosphere and the agenda for the event.

The first is from a young intelligent medical student Husna.  The second one is from another young wise beyond his years lover of nature student Ben. Both wrote with sincerity and a good dose of deeper thought. If their tone and thoughts are what we can expect from today and the future, it adds fuel to the little fire of hope I keep burning.

God is just great, especially in turning things out and about, sideways and many other ways. I wrote in the previous post how i was a bit reluctant to go for this talk cause i had to babysit the lil sis, and know what. The session was just awesome, and i did not regretted even a bit for i learned a lot by just listening to the superb speakers which were Waleed Aly, an Australian lawyer who wrote the book “People Like Us: How Arrogance Is Dividing Islam and the West” of which was also the title of the forum, Tricia Yeoh, and Dr Farouk. Rev Sivin was the moderator, he is the pastor of the lutheran church which was the venue for the forum and indeed a good friend too.

Basically the format of the forum was rather a conversation, where the speakers changed opinions and experiences, at the same time the audience are free to pop in a question or two. They talked about how we should learn from each other, aspire one and another, accepting the differences, find similar platforms to discuss and cherish in shaping the societies that we are in for the better. We should eliminate the superior supremacy we have in the recent days, we should treat each other as equal as possible without any discrimination despite the differences in religious understandings, cultural practices or simply ideas. Sometimes, we prefer talking to people who would perhaps agree with us for we are afraid of conflicts that may arise when in fact there is a way in approaching or dealing with conflicts in the most civil manner as possible. Respecting one another is also an important virtue to learn and the one way to do this is to learn about others perhaps by exploring their religion then only conversation as such would bring about mutual respect, and indeed benefits to both parties and to the society as a whole.

Alhamdulillah, i’m blessed to get such opportunity to learn more and more each day. 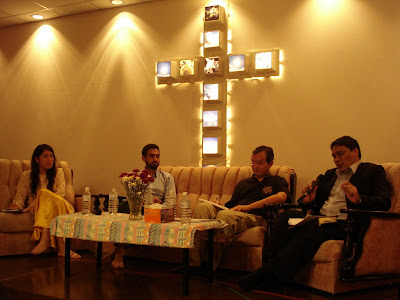 So I attended the People Like Us: How Arrogance Divides People forum at BLC last night.
This was what the promo said:

In this upcoming forum, we hope to explore new ways forward as we bring together the stories and perspectives from two complementary experiences as minorities in pluralistic societies: as Muslims in a Western society and as Christians in a Muslim majority society.

All in all it was a good forum, or as Sivin would prefer to say, ‘conversation’. I’ve been to enough dialogues and forums to know that it’s not always easy to walk away from one feeling that you’ve received a great revelation or learnt something earth-shattering.

More often than not, if you’ve been keeping up with the conversations and developments in society, there is little that is novel in a dialogue. But dialogues do serve as agents of confluence, and it is the bringing together of threads already floating about out there that is the purpose of dialogues.

It was really something to see BLC packed, more so than I’ve seen on any given Sunday. More, even, than on Easter this year; I’ve yet to attend a BLC Christmas service. It was something even more to see that at least half of those who attended (this is just a rough observation; the guest book will have the full details) were not Christians or free-thinkers or people who’d accidentally wandered into church, but Muslims.

Point number one in overcoming division: we must begin to see places of worship as places to seek God and discuss matters of faith, not as taboo zones or restricted areas. Almost every religion is distorted by the media and public opinion, and one of the best ways to learn about a religion is to see for oneself how its followers actually worship.

One of the very first things brought up by Waleed, who started the conversation, was that everyone is a product of his/her history. He said this in commenting on the Iraqis’ democratic choice of a ‘theocracy’ in favour of a secular government. He pointed out that Europe was at its nadir when the Church was in power, while the Middle East, on the other hand, reached its zenith under the rule of the post-Mohammedan Caliphs.

This particularly resonated with me because I’ve been bringing up the subject of historical context and influence quite a lot in the Student Council’s recent online discussion on the teaching of Science and Mathematics in English.

Dr Farouk said that of all the things with which God has endowed His creation, reason alone is unique to man. I don’t know how this impinges on what I learnt from the forum, but I remember that when he said that, the word logos came to mind.

Specifically, the word as it appears in the epigraph to T.S. Eliot’s Four Quartets: "Although logos is common to all, most people live as if they had a wisdom of their own." (from Die Fragmente der Vorsokratiker)

All in all, I feel the conversation called, however indirectly and subtly, for more thorough self-examination, both in moral (our own shortcomings and prejudices, and not those of others) and spatio-temporal (our history, and where we are now) terms. 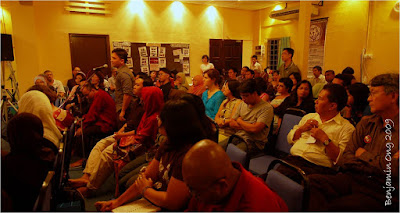 Q&A session. As is not uncommon, some of the ‘questions’ turned out to be more like lectures from the floor! 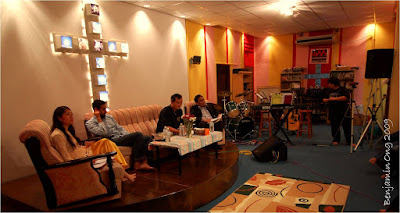 Sivin taking down the questions during Q&A.

Waleed remarked that, when religion is working well, it leads to introspection, but when it is working badly, it works in the opposite. 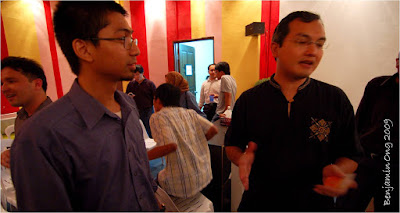 Bumped into Ashaari at the forum. It’s been ages. He’s now with Mercy Malaysia. Turns out he knows Sivin, too.