I confess I was as frustrated as some of the panelists while watching this “conversation”. Perhaps the best part was when the three older speakers stated what they believed to be the Gospel at the end.  I think there was value in having the younger twins on the panel but then while I appreciate their sincerity, I think they were a little out of place in the discussion.

I do think Scot is bringing out a very needed point stressed again and again, i.e. the emerging church or conversation was in my view forcefully defined more by the critics than the participants and even authors themselves to those who in the words of Kevin are concerned with what they saw as uncomfortable “trends”.

Frankly, I’ve grown tired of this discussion when people too quickly say that another person is abandoning orthodoxy just because they do not articulate their theology in the same way they do.  If that is the case, a big chunk of us in Asia, Latin America and Africa are already written off.

BTW, I like Lesslie Newbigin too.  And I think he and many other mission, contextual and practical theologians have already provided better directions for us in this conversations to move forward.  I’ve been a little quiet on this conversation in the blogosphere for a while. But I’m still eaves dropping as I’ve done since day one, and I will chip in once a while. Seriously, after watching this video, I do think if this is how the USA Christians especially Protestant Evangelicals want to talk about the emerging church and the issues it has provoked, it’s a tiring adventure in missing the point. There must be better ways forward.  The fact is some are already doing it.

I first read Brian McLaren and continue to read and engage his thinking because he was able to put into words beyond some polarities and categories which frustrated me.  The whole emerging church conversation was more of the bonus, and maybe for some provided a label for it for all its worth.

The following six stages documented by Bob Robinson helpfully describes not only Brian’s journey but also the themes some of us have been wrestling for a long time.

STAGE ONE: He said it started out as a conversation among young, white, middle-class pastors (and him as the old guy at 42) about how to do church in order to reach 18-30 year olds outside of the church. McLaren’s book The Church on the Other Side reflects this conversation.
STAGE TWO: The emerging church conversation quickly shifted from church-focus to how to evangelize and disciple people, and McLaren’s books More Ready Than You Realize and Finding Faith reflect that stage of the conversation (Finding Faith has subsequently been repackaged as two separate books: A Search for What Makes Sense and A Search for What Is Real).

STAGE FOUR: The next stage entailed the realization that the conversation was very white and male and middle classed. They began to expand the conversation into seeking to understand church history and other Christian traditions, while inviting women, mainline Protestants, Eastern Orthodox, and Catholics into the discussion. This led to McLaren’s book, A Generous Orthodoxy.

STAGE FIVE: With this desire to get beyond the particularity of American Christianity, the Emerging Church conversation began listening to those outside the United States, hearing how others see the gospel as focused on Justice and Civil Issues. They discovered that The Kingdom of God is much more the center of the gospel outside of the states. McLaren’s books The Secret Message of Jesus and Everything Must Change reflect this stage.

STAGE SIX: McLaren said that the next stage he senses the conversation moving into is what he calls “Spirituality:” cultivating a deep awareness, love, and worship of God. This is reflected by his new book, Finding Our Way Again: The Return of the Ancient Practices.

The Inquisition of Brian McLaren?

I think quite a few people would respond in the same way after meeting and hearing Brian in person. 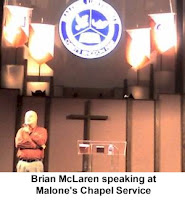 McLaren’s morning chapel message was very good. He talked about the Kingdom of God and how that message was radical for its time in that it was in opposition to the Kingdom of Caesar. McLaren pointed out that while Caesar’s kingdom was one of peace through violence, Jesus’ kingdom was one of peace through sacrifice. Very moving and very biblical. One person I met that morning said she came expecting to hear heresy, and found nothing in the message that wasn’t solidly biblical and applicable.

Seriously Brian might be pushing the boundaries for many Christians but from a church history perspective he’s no heretic or apostate.

McLaren at Malone: My Musings on the Męlée

I noted some interesting observations by Bob Robinson.

When the forum was opened to the audience to ask questions, the crowd at the two microphones grew quickly. The questions were mixed between those sympathetic to McLaren and those clearly hostile toward him. More than once, people in the audience asked McLaren if he believed that Jesus Christ came to die as the substitutionary atonement for sin and to save us from a literal hell so that all who believe may have eternal life. The evening ended with a pastor that is known for being the local “John MacArthur” asking about justification by faith alone, and trying to get McLaren to admit he does not believe that righteousness comes only by faith in the death of Christ. McLaren didn’t bite.

I enjoyed watching people ask their questions and then walk away shaking their heads in self-righteousness. No matter what answers they received to their questions, they had already determined not to listen or seek to understand. They were already in scoffing mode.

In some ways, in our little event a couple of years ago with Brian McLaren we experienced something small scale and similar to what I heard happened here. To me this direction is more promising from a wider church perspective.

* The central question that arises each time the church goes through one of these 500 year rummage sales is “Where now is our authority?” * Another important question: What does it mean to be a human being? Descartes’ “I think therefore I am” no longer cuts it * Sola Scriptura: Luther took a flesh & blood Pope and replaced it with a paper one. Protestantism’s great gift to the world was universal literacy. It’s other gift was divisiveness * Jerusalem is good, but the energy is in Antioch. We are here to serve the Kingdom of God, not the old or the new

* What you focus on determines what you miss * Our traditional understanding of Jesus may not have been wrong, but partial * We must learn to see Jesus through the sight lines of his ancestors rather than his descendants only * Jesus went to Galilee. It meant something. If he came today would he go to Wall Street, Hollywood, the Ninth Ward… where?

* With dualistic thinking, someone always has to be blamed. The system caves in on itself * The sun rises on the just and unjust. You can’t form a system of exclusion on that! * Jesus did not come to change God’s mind about humanity. He came to change humanity’s mind about God * We have fly-paper minds… everything that gets close sticks. Don’t call that ‘thinking’. It is narcissistic, egocentric, needy, and fragile * “I have no doubt that the Spirit was in the works of the Reformation.” But you can’t have the need to prove the other wrong (adversarial thinking) and be the contemplative mind * We don’t want to be contemplative because we have to give up control * Belonging/belief systems have come to replace transformation. We must turn from a belief system to an inner experience. Know them, don’t believe them * Recognize that I am living inside a mind bigger than my own. Someone is loving through me, and all I am is the conduit. * Francis didn’t run off and join the Franciscans – He just did it.

* God doesn’t call the qualified but surely qualifies the called. * Am I a fan or a follower of Jesus? * When we pray for God to ‘fix’ a problem, maybe Jesus kneels and prays for us to go out and be the solution * Maybe we’re given a little piece of God’s heart. We couldn’t deal with the entirety of God’s sadness for His children. (Note: Maybe this is what it means to be “made in the image of God”) * If we are free, and God’s poor are not free, then we are not free. * We cannot talk about church and theology without talking about justice. * We like our poor to look a certain way. The poor come to us in many different packages, and some may not be palatable. Some are angry. We must learn to see them as Christ sees them. (Note: Otherwise it’s just about us) * We must model incarnation: You cannot redeem what you will not assume

* Stop explaining/complaining about the church we have experienced and work at becoming the church we dream of. * We need to be relevant to the big questions of the day while retaining our cultural peculiarity * Fascinate the world with grace! * The church needs discontent. Don’t leave the church but submit to the authority of the larger Body of Christ * You can have all the right answers and still be mean. And if you’re mean, no one will listen to you.