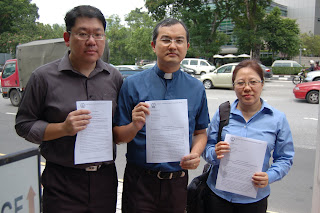 KUALA LUMPUR, Wed, 8 Sept 2010: Representatives of the Youth Wing of the Council of Churches Malaysia (CCM Youth) handed a memorandum of protest to the United States Embassy today calling on the US government to stop a church in Florida from burning the Quran this 11 Sept 2010. 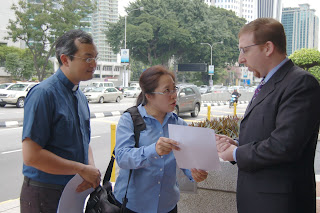 The group of five people were led by Bangsar Lutheran Church pastor Rev. Sivin Kit, and CCM Youth Moderator and Executive Council member Chrisanne Chin, who handed the memorandum to Jeremy Nathan, the Deputy Political Counselor of the US Embassy in Kuala Lumpur.

CCM Youth is strongly against threats by Dr Terry Jones of The Dove World Outreach Centre, a small congregation of 50 people in Gainesville, Florida, to burn the Muslim holy text, the Quran, on the anniversary of the World Trade Center attacks, condemning attempts to ban or burn another faith’s holy text as tantamount to a form of hate crime that must be dealt with utmost severity.

CCM Youth reiterates that The Dove World Outreach Center’s intentions do not represent the sentiments of Christians in Malaysia, and considers the act of burning the holy scriptures of any faith a disrespectful, provocative, insulting and harmful act that is contrary to the fundamental Christian belief to love our neighbours as ourselves and to be peacemakers.

After handing over the memorandum, the group was invited into the embassy for a private discussion with the officials.  Kit and Chin were assured by Jeremy that this matter is being taken very seriously up to the highest levels of the US Government as both the White House and the State Department have issued statements of warning and criticism against Jones and his church. 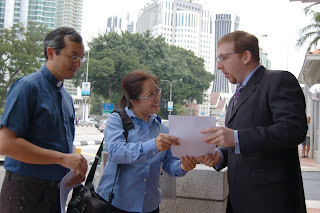 The group was encouraged to learn that Americans have stood up to condemn the act, and at least two dozen counteractive measures have been made by the grassroots of the American interfaith community – from synagogues to churches to mosques – working together in solidarity against Jones’ plan.

CCM Youth believes that there are better constructive ways to commemorate September 11, and will endeavour to promote to the Government of the United States, as well as the United Nations, to turn this day of grief and sadness into an international day of reconciliation and just peace, upholding the rights of every single human life created in the image of God Almighty, henceforth building an equal place for all under the sun.

Note: To sign the petition go to Please don’t burn the Koran