It’s lovely to see BLC  and Godly Play through the eyes of David Pritchard. Read on . 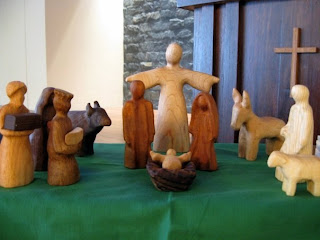 As soon as my Godly Play workshop was over at the Malaysia Baptist Theological Seminary extension centre in Klang Valley, I was placed in the capable hands of the Revd. Sivin Kit, pastor of Bangsar Lutheran Church (BLC), in Kuala Lumpur. Sunny & Rosalind Tan were on their way to Australia to attend their son’s graduation, so now I was ‘changing’ my church affiliation from Baptist to Lutheran!

I had already been in touch with Pastor Sivin through contacts made via Facebookand Twitter. An inveterate blogger and a prolific user of social networks, Sivin combines Evangelical theology and an ’emerging church’ inclination with a strong commitment to and engagement with social issues in Malaysia and beyond. He is widely read and had already researched many of the Godly Play texts and websites, and had in fact tried to implement this method in his church. The Sunday school coordinator, Phoebe Long, and several members of her children’s ministry team from Bangsar Lutheran took part in my Godly Play workshop in KL, so there was plenty of evidence to suggest that this particular fellowship wished to move deeper in their understanding and practice of this method. The previous day,Rosalind Tan, the director of the Holistic Child Development Institute in Penang, had commented that Malaysia really needs a working model of Godly Play so that any enquirers can see what it’s all about. Maybe, BLC is the place to start. 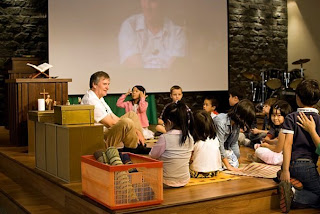 My visit to Kuala Lumpur coincided with the temporary move of Bangsar Lutheran Church’s worship services to the brand new custom built Luther Centre in Petaling Jaya, KL, where I would also be staying overnight in one of their, as yet, unused guest rooms. The following day would be the very first Sunday worship service at the centre, so a special day for the church.

Next morning, at the start of the service, Pastor Sivin Kit informed the congregation that it was World Communion Sunday. He remarked that it was therefore very appropriate that there were guests from different parts of the world. Besides me, the visitors included the pastor and two other members from a partner Lutheran church in Germany, who were on a tour of Malaysia. They were invited to give a visual presentation of their work in Bavaria. Another lady, Sue, was also visiting BLC and said that, like me, she would also be taking part in the international consultation that would be starting that same afternoon in Melaka (see next post).

My own contribution to the service was to share with the congregation a short message from Luke 24 (the story of the walk to Emmaus, which was also the theme for the Melaka consultation) and to demonstrate Godly Play with a group of children from the church, which was probably the most delightful moment in my whole visit to Malaysia. I chose to tell them the parable of The Great Pearl.

It always amazes me how easily and readily children the world over can disconnect from their immediate surroundings and enter wholeheartedly into a story through the power of narrative in approaches such as that used by Godly Play. The children were up on stage before dozens of grownups, a number of whom were busy taking photos and videos of the event. The action was being projected up onto a big screen so that all the congregation could see what was happening down on the floor within the circle of children. They were facing a complete stranger, a Westerner with a funny English accent. And yet…! Amidst all the paraphernalia of cameras, flashes, microphones, etc. and a multitude of adults (not at all to be recommended in a normal Godly Play session!), these children, just like their little brothers and sisters the world over, were able to connect immediately with the story and the subsequent wondering in such an engaging way. 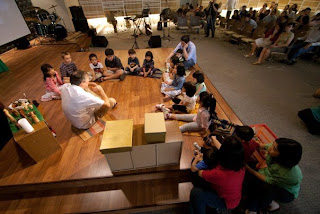 And not only the children! Many of the adults, too, were similarly caught up and engrossed, as a short video clip on YouTube demonstrates. The introductory text on the video clip reads:

No clown suit, no loud music, no excited shouting. David told the children a quiet story about a pearl, and they were rapt. So were the adults. With a couple of exceptions :).

The person who uploaded the clip also added the following note on YouTube:"David’s session of Godly Play had the children captivated, with a quiet story of a pearl. Quite a different approach from the ‘loud and flashy’ paradigm. It seems to be good for adults, too ;)". It’s true that what works with children also usually works with grownups – at least those who are willing to connect with the ‘child’ they carry within themselves.

The comment on the video clip above sums up nicely how so much of today’s children’s ministry is often based on a fast-paced entertainment paradigm. Although both boys and girls obviously need and enjoy times of boisterous and exuberant upbeat activities, it is surely a very low view of children to suggest that such an approach is essential in order to hold their attention for more than a few minutes. Godly Play allows children to quietly enter into deeper levels of ‘play’, in which they are actively involved through their imagination and wondering, and to meet a playful God who invites them (and grownups, too!) in a gentle and poignant manner to relate the Bible narratives to their own life situations. This is far more fulfilling than mere entertainment!

After the service, and over lunch in a restaurant in a nearby shopping mall, I was able to answer questions and talk further about the merits of Godly Play with several members of BLC, especially with Phoebe, the coordinator of the children’s ministry at the church. Hopefully, this contact will continue in the future as we work together to ‘grow’ Godly Play in Kuala Lumpur.
More photos here.